Anglo American’s controversial project that seeks to expand the Los Bronces copper mine by US $ 3 billion, located under the Yerba Loca nature sanctuary 52 kilometers from Santiago, has weakened its plans after a technical error in a document from responses to inquiries from shareholders of the company. Anglo American presented in July 2019 the first Environmental Impact Study for the underground expansion of Los Bronces on the impact on nearby glaciers and, therefore, the water sources for Santiago.

DeSmog, the British media in charge of the investigation, reveals that the pollution measurement used in that study does not consider relevant factors regarding the impact of glaciers. This medium discovered that in the cement production of the mining project, there will be greenhouse gas pollution equivalent to 9.7% of Chile’s total emissions.

New research from DeSmog found that:

On May 7, the company listed on the London Stock Exchange, responded to inquiries made by its shareholders, on that occasion Anglo American unwittingly revealed that its “internationally acclaimed independent scientists and experts” had mistakenly applied the Swiss standards to the contamination of the land, instead of that corresponding to the contamination of glaciers in the Environmental Impact Study of the expansion project for Los Bronces.

In the responses it was indicated “the effect of the mining activity in glaciers is also low and represents less than 10% of the limit established by the Swiss regulation (200 mg / m2 / day)”. Experts informed DeSmog that there is no known standard for measuring this impact from pollution on glaciers.

One of the main characteristics that glaciers have is to reflect the sun’s rays and regulate global temperature, therefore, soot and dust are determining factors in the glacial melting process, since if they are deposited on the white surface of the solid ones, the melting is accelerated.

DeSmog contacted the Swiss Federal Office for the Environment, Foen, to find out about the standard that has been used by Anglo American. Foen’s response was: “The Swiss Air Pollution Control Ordinance sets limit values for the environment, ALV (Environmental Limit Values), for dust fall at 200 mg / m2 per day as an annual average. These ALVs serve the purpose of protecting the earth and, indirectly, protecting health. They have no relationship with glaciers ”.

The Swiss Federal Institute for Forest, Snow and Landscape Research added “a definition of what is safe would be difficult” for particulate deposits in glaciers and that “no such recommendation is known.”

Anglo American could be badly applying pollution measures to glaciers since November 2019. An Anglo American community relations manager released the following document on social media and the Farellones community. 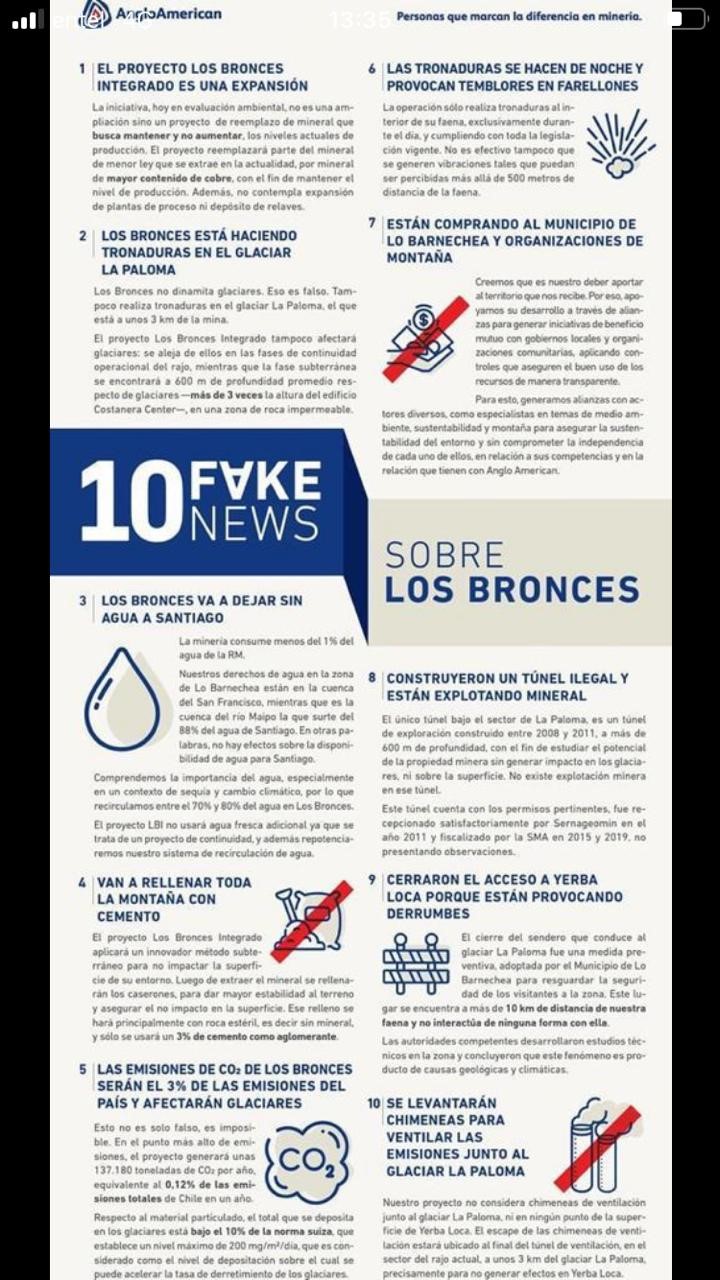 However, this document contained basic mathematical errors. Item 2 describes the 600-meter depth of the mine’s underground infrastructure – including tunnels under glaciers – as “more than three times” the height of the Costanera Center, the tallest building in Santiago, which measures 300 meters.

At point 5, the document mentions the misapplied Swiss standard for glacier damage, republished months later in Anglo American’s response to its shareholders.

The Swiss standard error was mapped by DeSmog in Anglo American’s pending Environmental Impact Study (EIA) for the underground expansion. The expansion project cannot go ahead without the approval of the EIA by the Chilean government. Both GeoAire and Jaime Llanes y Asociados, the environmental consultants hired by Anglo American to produce the EIA, incorrectly applied the Swiss land pollution standard to glaciers (02-Annexes Chapter 3 – 1 of 6, Part II, p.10; and 01-Chapter 4: Impact Assessment, p.69.)

Whether or not the impact of dust and soot on nearby glaciers is being calculated means a gigantic turn in the discussion, since not being measured correctly, the negative effect on frozen water sources would be brutal. The particulate matter released by combustion engines could accelerate the retreat of glaciers, which are extremely sensitive and have a very different surface than the land on which the Swiss standard applies, which does not measure the soot that it is much more harmful than dust.

The multinational mining company will vent mineral dust and diesel emissions, including soot, from the future underground operation through smokestacks (Executive Summary p.4) towards the sky, depositing it in the Andean winds just 2.1 kilometers from the nearest glacier. Dove.

Anglo American has excluded much of the glaciers located south of the vents from the design, as it does not consider them influential to the project. 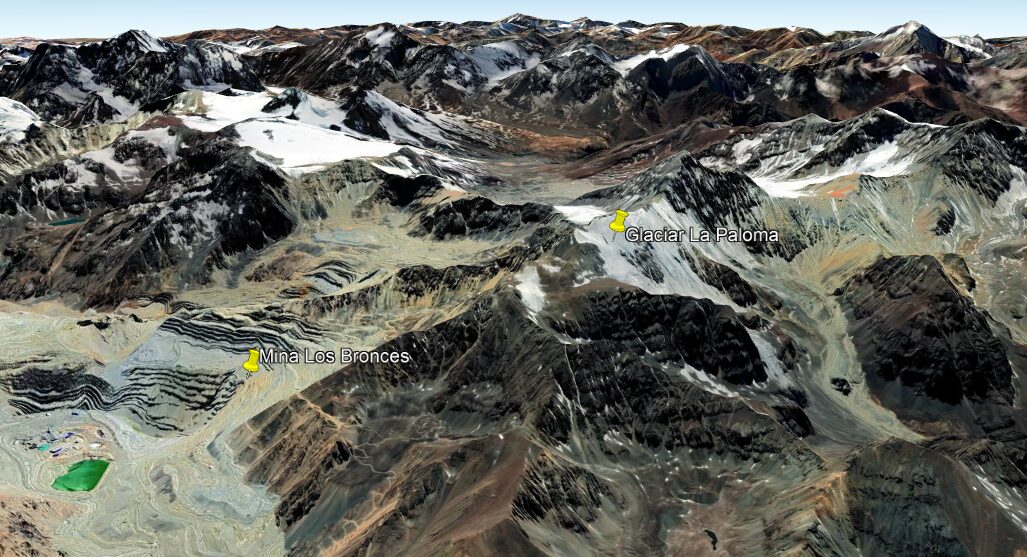 Regarding the limits of future air pollution from the Los Bronces mine, Chilean geographer Dr. Alessa Geiger, referred: “It seems that they do not take into account the local geography or topography to delimit their area of influence.”

The Environmental Impact Study (EIA) records an average mineral dust measurement of 19.9 mg / m2 per day (rounded to 20 mg / m2 per day by Anglo American) at this location between February 3, 2016 and the March 7, 2018. This value does exceed 10% of the daily standard that the Swiss apply to land, but as Foen pointed out, this standard does not extend to glaciers. In addition, for the particulate material to reach the Los Sulfatos monitoring site, it would have to pass directly or near a glacial system located south of the mine. 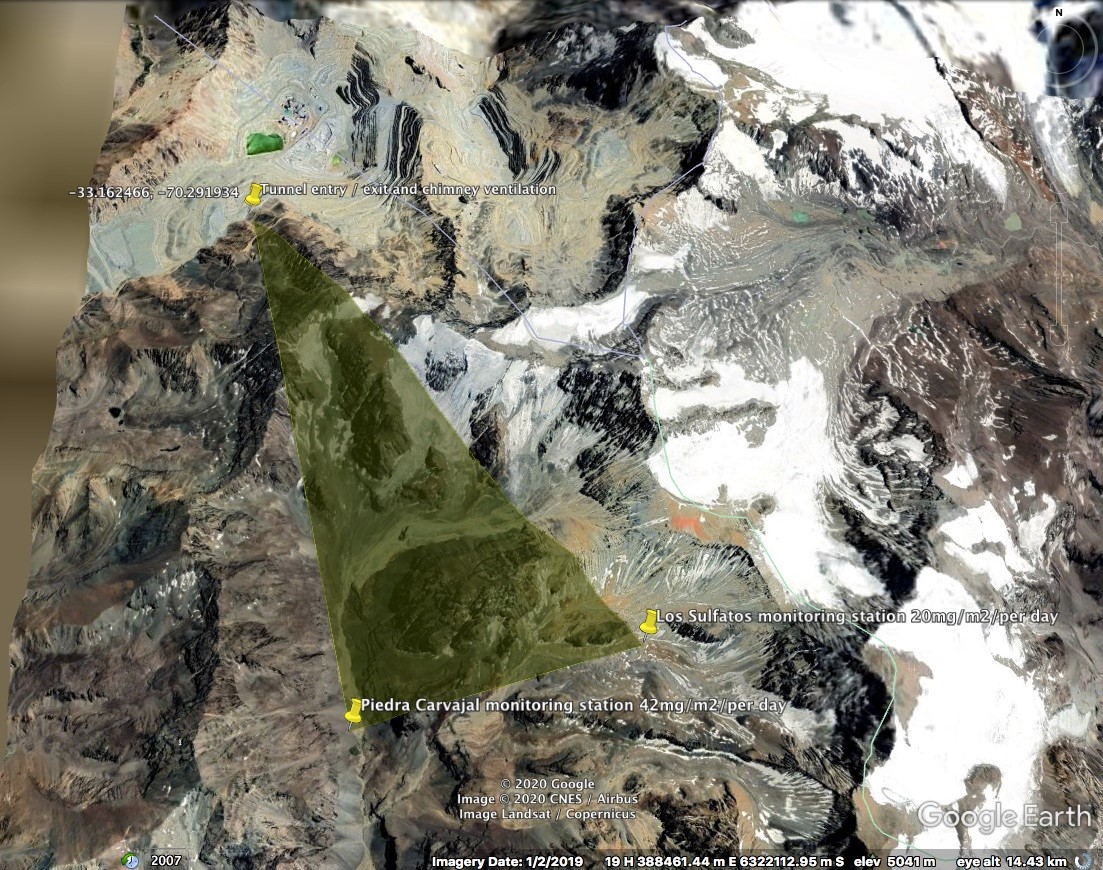 Map of the flight of particulate material coming from the mine as it crosses glaciers before reaching measurement stations. The position of stations was taken from the EIA (01-Chapter 4: Impact Assessment p.56) / © Desmog.

Anglo American provides this pollution measurement of 20 mg / m2 per day as justification for the mine, despite erroneously occupying the Swiss standard historically. The mine expansion project will include a new system of ventilation shafts at the exit of a tunnel on the north face of Cerro La Paloma. The tunnel exit is located on the periphery of the Los Bronces mine, already in operation, only 2.1 kilometers from the glacier system located to the south. If it expands underground, emissions from 20-ton diesel trucks would be vented out there while working on site, day and night, for at least 14 years, to remove 166 million tons of raw material from beneath the nature sanctuary. Yerba Loca.

The pollution of glaciers, then, could be much higher than the current one with this new source of emissions a few kilometers from glacial masses.

The air quality monitoring site, Piedra Carvajal, registered twice as much particulate matter as Los Sulfatos -41.7 mg / m2 per day- between January 27, 2016 and April 9, 2020. This information was not transmitted to Anglo American shareholders in the company’s response sent on May 7.

Fabrice Lambert, Swiss glaciologist at the Pontificia Universidad Católica de Chile, assures that: “41.7 mg / m2 per day can be seen as highly polluted for a glacier.”

As Fundación Glaciares Chilenos we are against carrying out projects that may affect glaciers and their environment, and that in turn put at risk the water supply of more than 7 million inhabitants. This type of project should not be approved nor should it be allowed to be carried out as a result of the large number of errors in its Environmental Impact assessment.