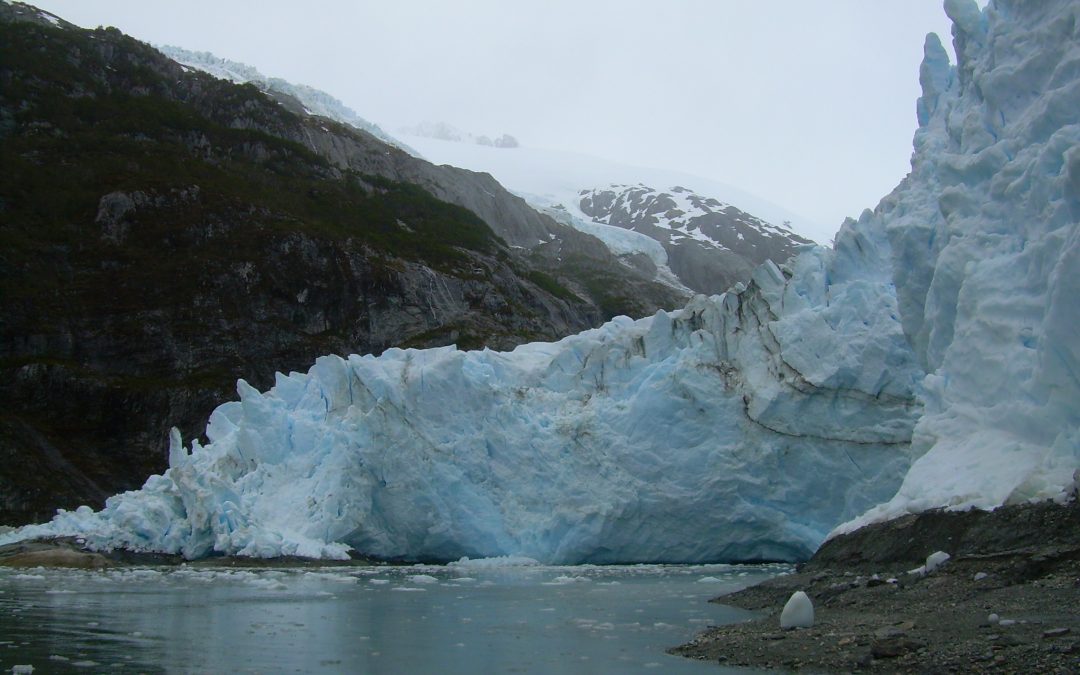 The Serrano Glacier is located on the northwest face of the Darwin Mountain Range, at the bottom of the Agostini Fjord and its name is in tribute to Lieutenant 2nd Ignacio Serrano, hero of the Iquique naval combat and brother of Ramón Serrano Montaner, who ventured into the region of Ultima Esperanza in 1889 and hence the name of the Serrano glacier in Monte Balmaceda.

This glacier is in contact with the salty water, it is found in a fjord system that it shares together with about 14 more glaciers, 7 of them being part of a separate cordon of the Darwin Mountain Range, called Navarro with a NW-SE direction.

The few records that are available of the Serrano Glacier indicate that from the period from 1870 to 1986 it had a slight decrease of 0.00 to 0.05% of its total mass. While for the period from 2001 to 2011, it was the fastest period of its decline (Davies and Glasser 2012). However, and taking as data the photographs of the American Air Force, which flew over the area in 1945, this glacier and especially its terminal area, would have covered more than half of what is now Serrano Bay.

This glacier, which acts as the headwaters in one of the Fjord’s ends –Serrano Bay-, falls directly into the sea, having contact with salt water. Its accumulation zone and its ablation zone are clearly denoted, having as its equilibrium line close to 900 meters above sea level, (personal information from Inti González). It also has a thin central moraine.

The Darwin Cordillera is the third largest freshwater reserve in Chile. It is an approximate extension of 2,300 km2, below the mass of the Southern Patagonian Ice Field with 9,659 km2 and the Northern Patagonian Ice Field 3,953 km2 (certified Cequa 2016). It is located in the SW and S sectors in the Chilean sector of Tierra del Fuego Island, on the mountain range of the same name, which is oriented in a West-East direction and mainly from the North, bordering the Almirantazgo Sine and the Beagle channel due to the South, between Latitude ° 54º20 ‘S and 55º S, longitude ° 68º45’ W and 71º20 ‘W. Furthermore, this ice field is protected within the Alberto De Agostini National Park.

Like most of the ice in Patagonia and the planet, the Darwin Range’s ice field currently has average rates that tend to recede, the highest rates being the glaciers that descend on its north face. The best example has been the Marinelli Glacier – ° 54 32 ‘South Latitude and ° 69º35’ Longitude Weste- located on the north face in the Ainsworth Bay sector (Porter and Santana 2013) where between 1992 and 2000 it had a loss of up to 787 meters per year, being this glacier, along with the Jorge Montt glacier and the “O’Higgins” glacier, those that have lost the greatest amount of mass in the southern hemisphere. The Cordillera Darwin ice field has lost an average rate of -3.9 ± 1.5 Gt year-1 between the year 2000 and 2011, which is equivalent to a sea level rise of 0.01 ± 0.004 mmyr-1 and a rate of thinning average of-1.5 ± 0.6mw (Melkonian and Willis 2013)

Many glaciers of the Darwin mountain range have experienced losses until 2011 in the studies from 1986 to 2001, the glaciers with the sea environment had the highest loss rates, their loss being more than double compared to the period 1870-1986. The number of glaciers that receded the fastest between 1986 and 2001 was 29, compared to 16 from 2001 to 2011 (Davies and Glasser 2012) as the case of the Marinelli glacier already noted and being the largest studied in the area.

Its decline could be estimated by comparing photographs ranging from 2016 to 2018. In recent years, aboard the Moto / Nave Forrest, we have visited the area with tourists repeatedly, currently arriving at a small island of fine sediment left by the glacier just the year before. Using the photographs we have been able to compare the position of the glacier front and how it has been separated from its front moraine, to transform it into a small islet.

Previous to this and thanks to taking pictures, we have been able to detect an accelerated retreat of the glacirer front of about 30 to 50 meters and a thinning in his entire frontal area. About 4 years ago, we descended into what was a small frontal or terminal moraine in which the glacier was located over it in its entire length, ending in an ice cave where a small glacial river ran, on the other hand, in the sector adverse to the moraine was beginning to open a small bay.

It can be seen in the images taken on May 6, 2017 and compared to the one captured on January 5, 2018, how the Serrano glacier in its front located in its western sector, receded at least 40 meters, losing its lobe with its crack where the river ran, opening a bay that finally separated the moraine from the glacier itself, where two years ago they were united.

There was a thinning of the glacier that can be seen in the rock, a decrease in its height by almost a third for two seasons, and the exposition of the glacier after having released the moraine and later having left very quickly what is now a small bay, now the glacier in that sector is not taking the fjord, but it is on the rock substrate.

The shape that quickly receded its frontal area from the West, it happened that at the beginning of the year 2016 this lobe got cutted and felt, and in this way the ice mass that was on the moraine when it was already separated melted in less than a glacial year (March to March). 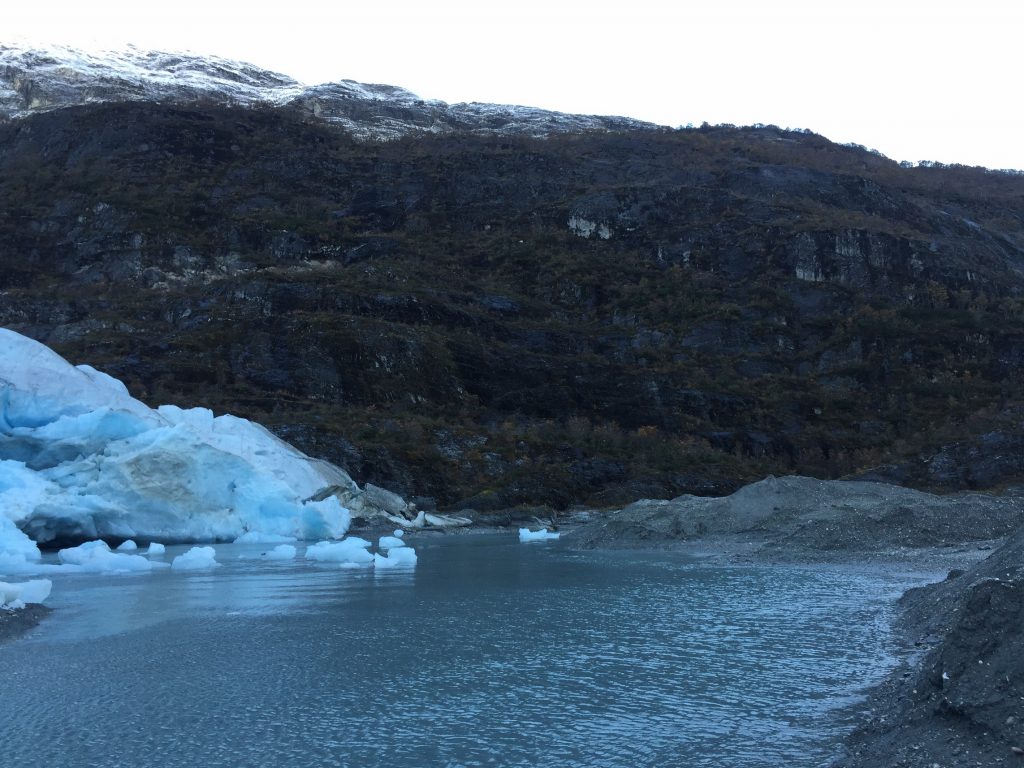 Photo 1, taken on May 6, 2017, where the glacier has already lost contact with its terminal moraine at a distance of 20 meters 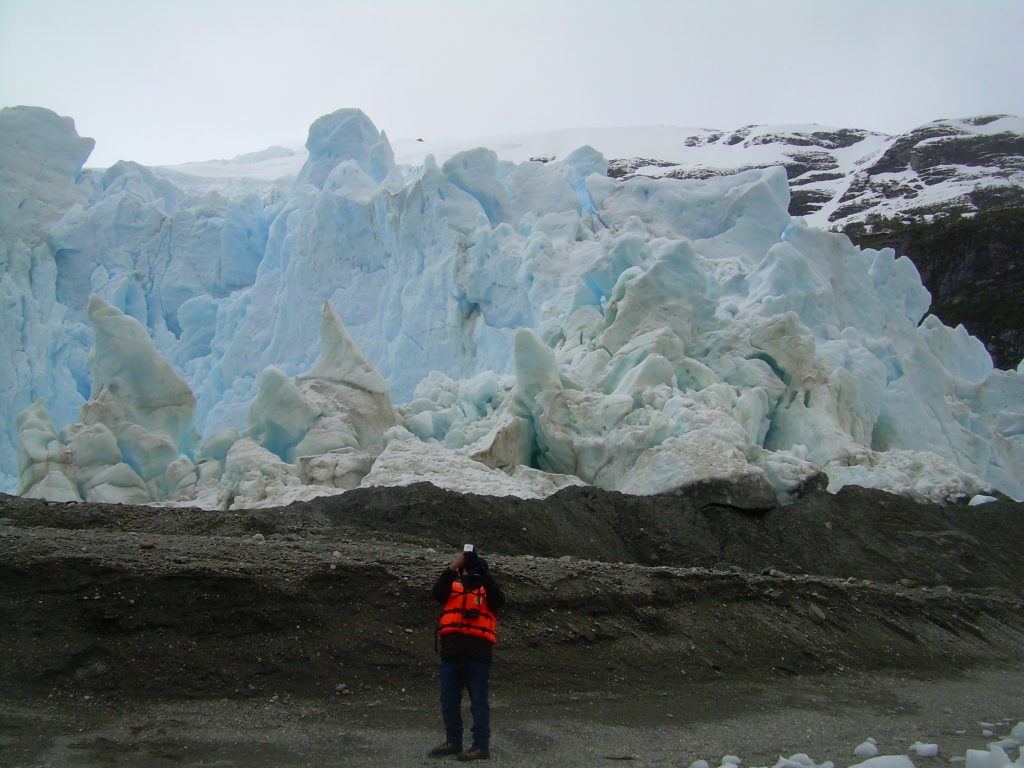 Photo taken on October 30, 2014, the glacier on its front moraine is seen in its entirety with no opening to a bay. 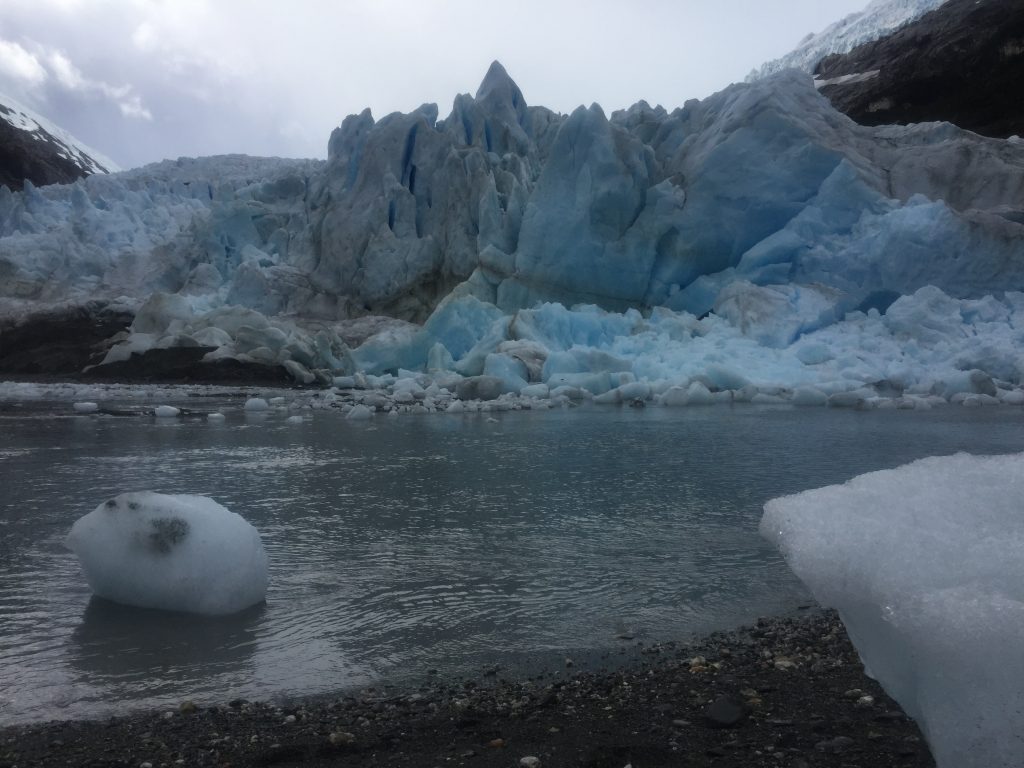 Photo taken on January 5, 2018, the glacier has receded more than 30 meters, leaving a bay between the moraine and its front, note that it was losing its contact with the fjord 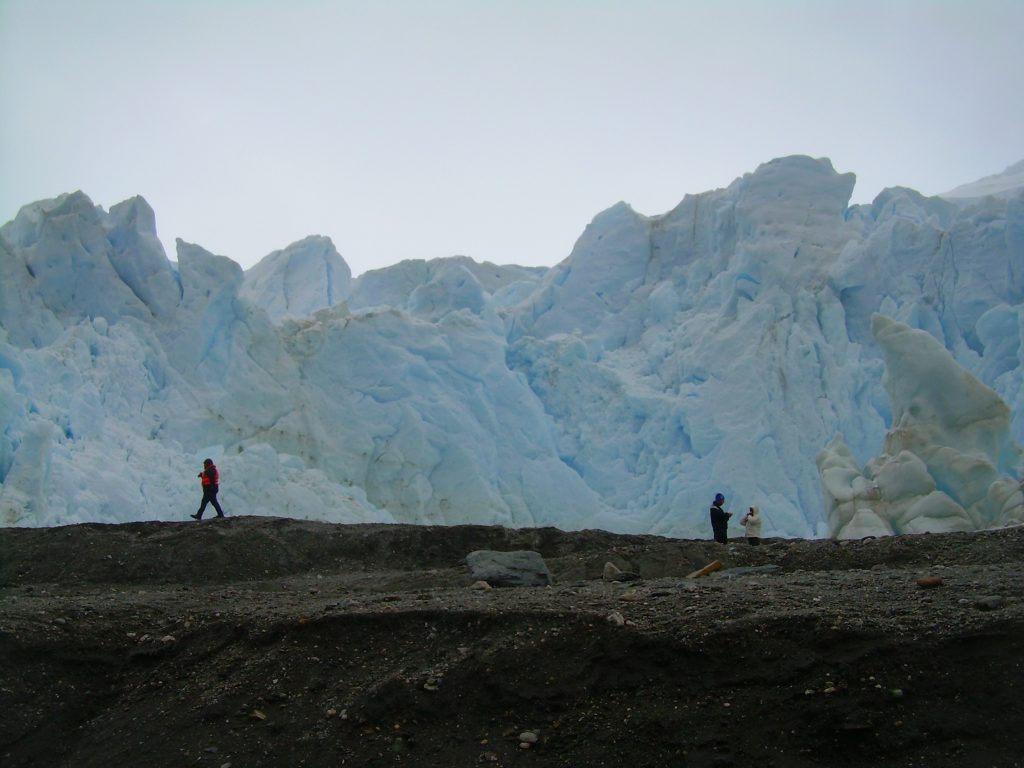 Hike on the front moraine of the Serrano glacier 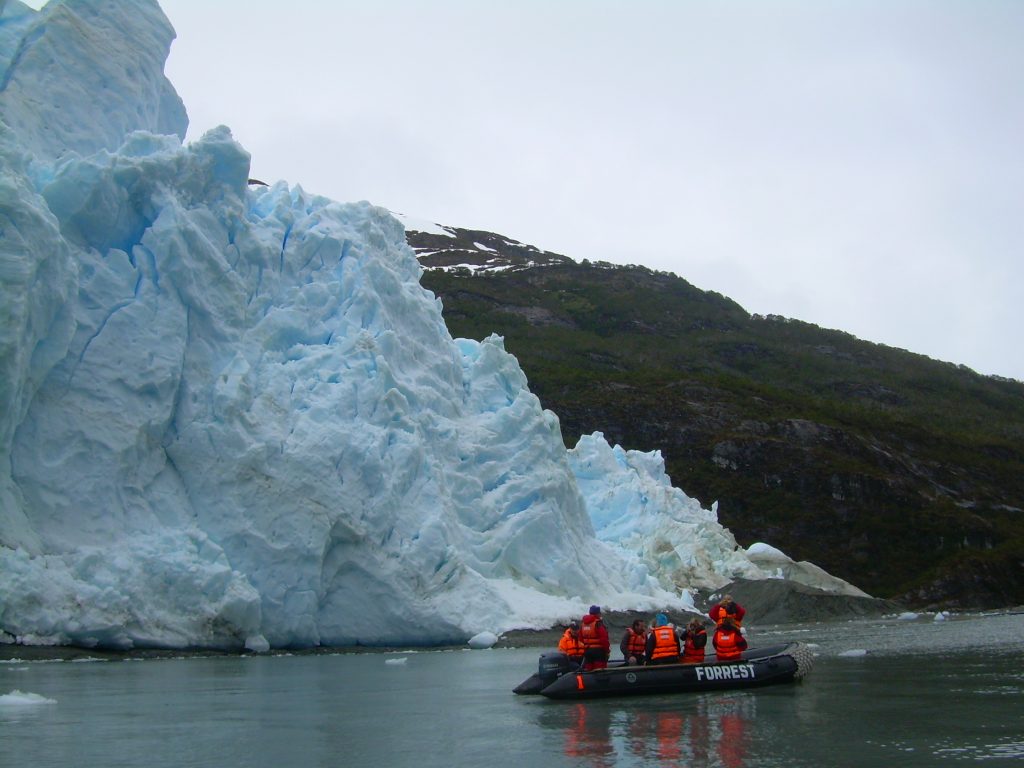 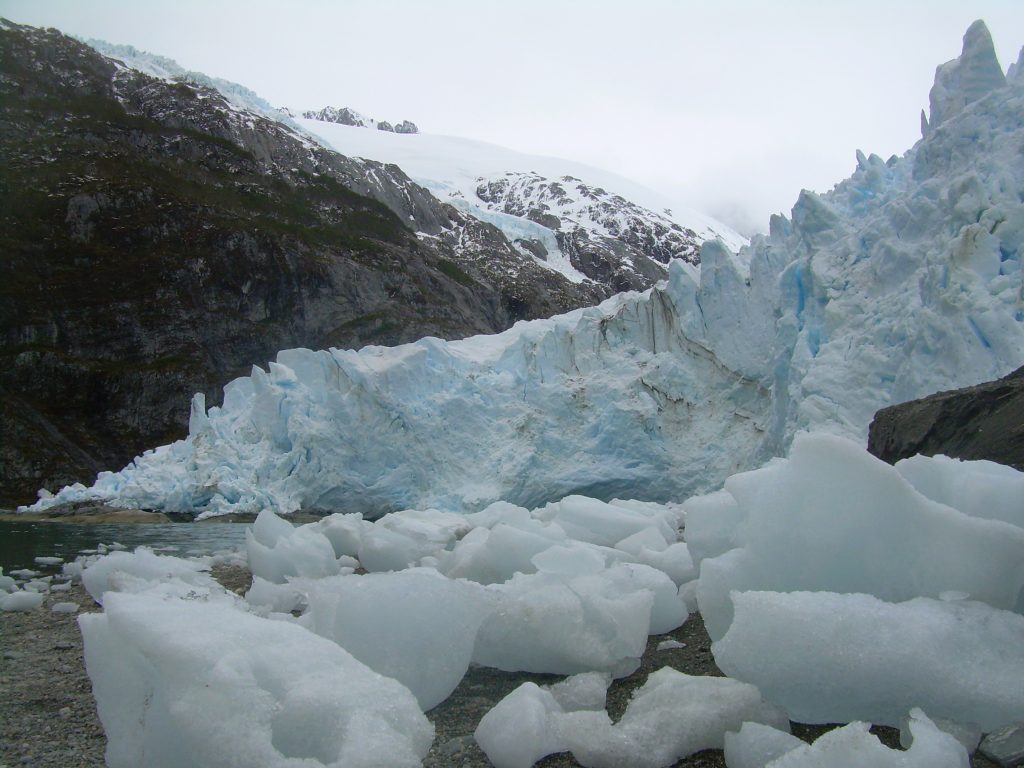