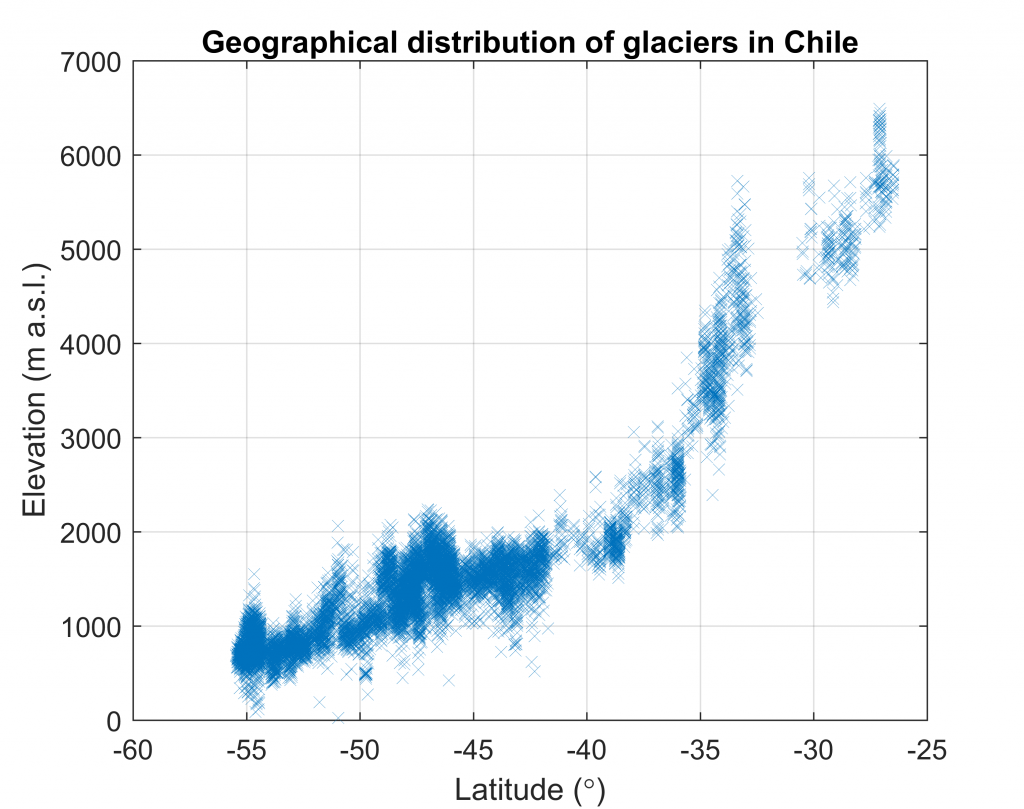 Where can we find glaciers in Chile?

The majority of glaciers in Chile (and South America) are located in Patagonia. Normally when Chilean glaciers are mentioned, one thinks of the expansive South Patagonian Icefield (which the third largest single ice mass after Antarctic and Greenland). However, the story is much more interesting than that. Glacier existence is controlled by temperature and snowfall and the balance of the two, and thus their presence, is limited by both latitude (distance from the equator) and altitude (height above the level of the sea) (Figure 1). Luckily, the amazing landscape of Chile supports both high altitude and high latitude glaciers 1. While ~86% of Chile’s glaciers (and ~94% of the total ice area) are found south of Puerto Montt, the rest (albeit smaller) exist in the mountains and sides of volcanoes all the way from lago Llanquehue to Parinacota. Naturally, these glaciers experience different climatic and local conditions, and as such, persist in different ways (read more about glacier types in Chile here).

The glaciers of central and northern Chile are found at high altitudes of generally >3,000 metres above sea level (m a.s.l.), and more commonly >4,000 m a.s.l. (Figure 1). This is because of the high temperatures that occur every year at low elevations in these regions (for example, Santiago summer is typically ~30 ºC daily). At very high elevations, average air temperatures are low because of the lower air pressure. This sustains higher proportions of solid precipitation (snow) and melts less ice, giving a healthy mass balance!

Conversely in Patagonia and the south of Chile, large glaciers can exist at much lower elevations and often make contact with fjords and the ocean (i.e. 0 m a.s.l.). This is because the temperatures are much lower on average, it snows a lot more, and the sky is often cloudy and so there is less energy from the sun.

As a result of these very different climatic conditions 2, only ~0.5% of Chilean glacier ice exists north of Coquimbo (Figure 2). This represents around 249 of the ~11,151 (*) total estimated individual glaciers of this very long country (following the most updated global inventory 3). However, the specifics of the survival of these glaciers is another story.

Figure 2. Map of Chilean basins and location of glaciers (blue). Estimates of glacier quantities (and % of total) and total areas (plus % of total) are given per 10 degree latitude band. Santiago is shown in red and the inset box shows the Región Metropolitana. Data source: Randolph Glacier Inventory V.6. Figure source: Thomas Shaw.

(*) As mentioned above, the information about the total estimated individual glaciers (11,151) is according to the most updated global inventory 3. Following a chilean based study 4, this quantity is around 24,000. The last could be over-estimated, but it is most probably that 11,151: might it be between 19,000 – 20,000 glaciers.