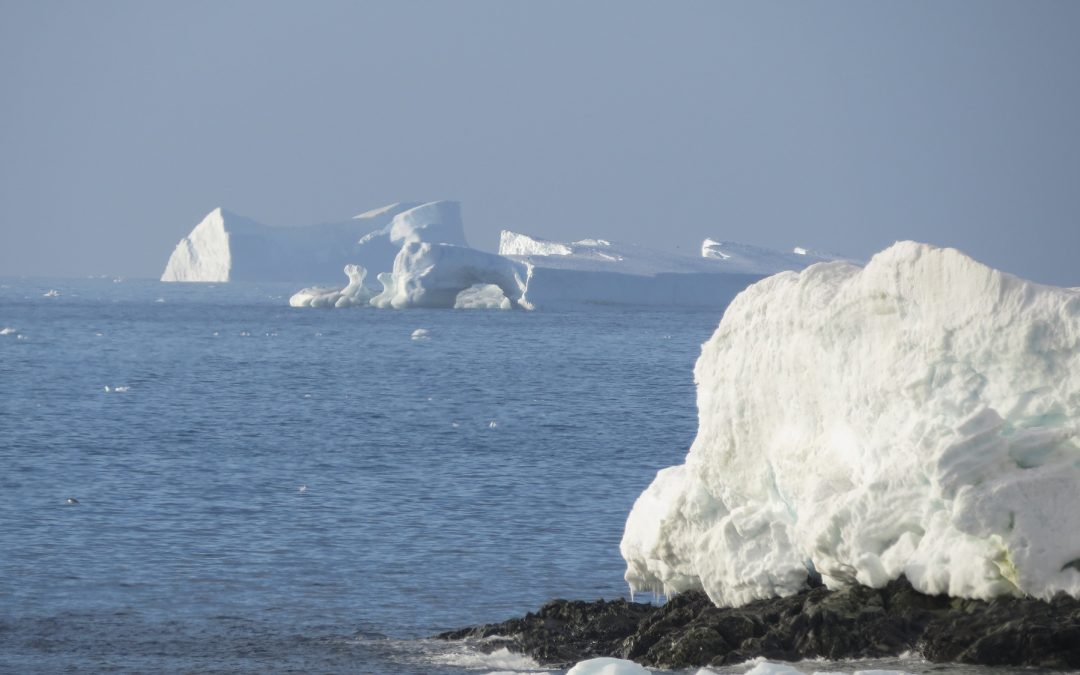 The Antarctic Ocean, also called the Southern Ocean, the Antarctic Glacial Ocean or the Antarctic Glacial Sea, is an oceanic extension whose existence as it is disputed. In general, its existence is recognized from the coasts of Antarctica to 55° South, the conventional limit with the Atlantic, the Pacific and the Indian Ocean. It is the penultimate in extension, only the Arctic being even smaller. The International Hydrographic Organization defined its extension and existence in 2000, coinciding with the limits of application of the Antarctic Treaty, but the decision was not ratified.

The Antarctic Ocean completely surrounds Antarctica, and together with the Arctic they are the only ones to surround the world completely. It has an area of 20,327,000 km², a figure that includes the peripheral seas, which in a clockwise direction are: part of the Drake Passage (or Sickle Sea), part of the Scotia Sea, Weddell Sea, King Haakon Sea VII, Sea of Lazarev, Sea of Riiser Larsen, Sea of Cosmonauts, Sea of Cooperation, Davis Sea, Mawson Sea, Urville Sea, Somov Sea, Ross Sea, Amundsen Sea, and Bellingshausen Sea . 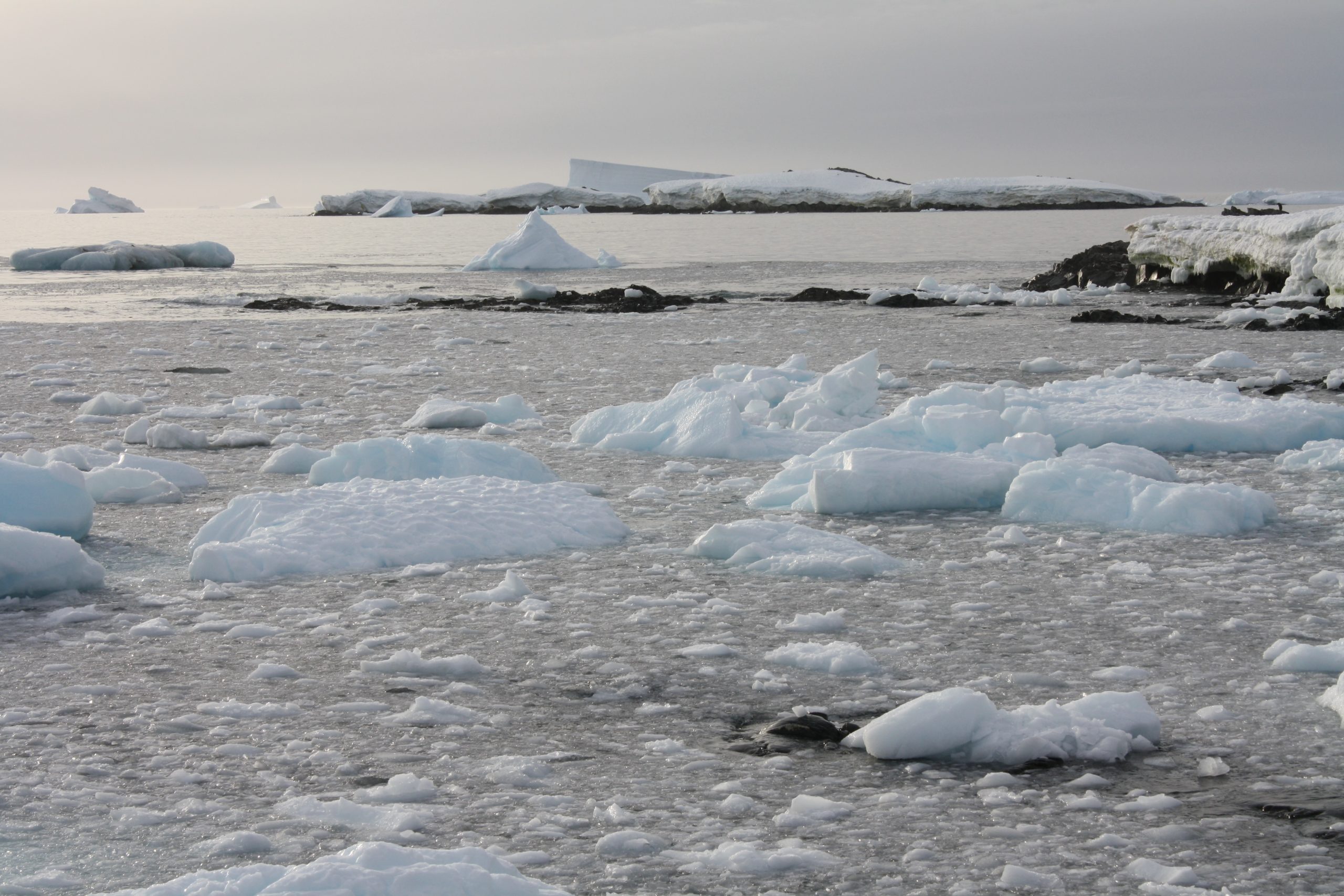 Panoramic of the coasts of Antarctica. The presence of icebergs is permanent. By Alfredo Soto.

The mainland is visible over the ocean with 17,968 km of coastline. The sea temperature varies from +10 ° C to -5 ° C. Cyclonic storms move eastward around the Antarctic continent and are frequently of strong intensity, and are caused by the difference in temperature between the ice and the open ocean. The oceanic surface comprises between 40 ° South latitude and the Antarctic Circumpolar Current, which has the strongest winds on the planet. In winter, the ocean freezes to 65 ° S in the direction of the Pacific and to 55 ° S in the direction of the Atlantic, bringing the surface temperature below zero. On some coasts, the strong and constant winds coming from the interior keep the coast free of ice also in winter. The 21,000 km long Antarctic Circumpolar Current moves eternally eastward. It is the largest current in the world and carries 130 million m³ / s, 100 times more than all the rivers on Earth combined. The waves can be very high. 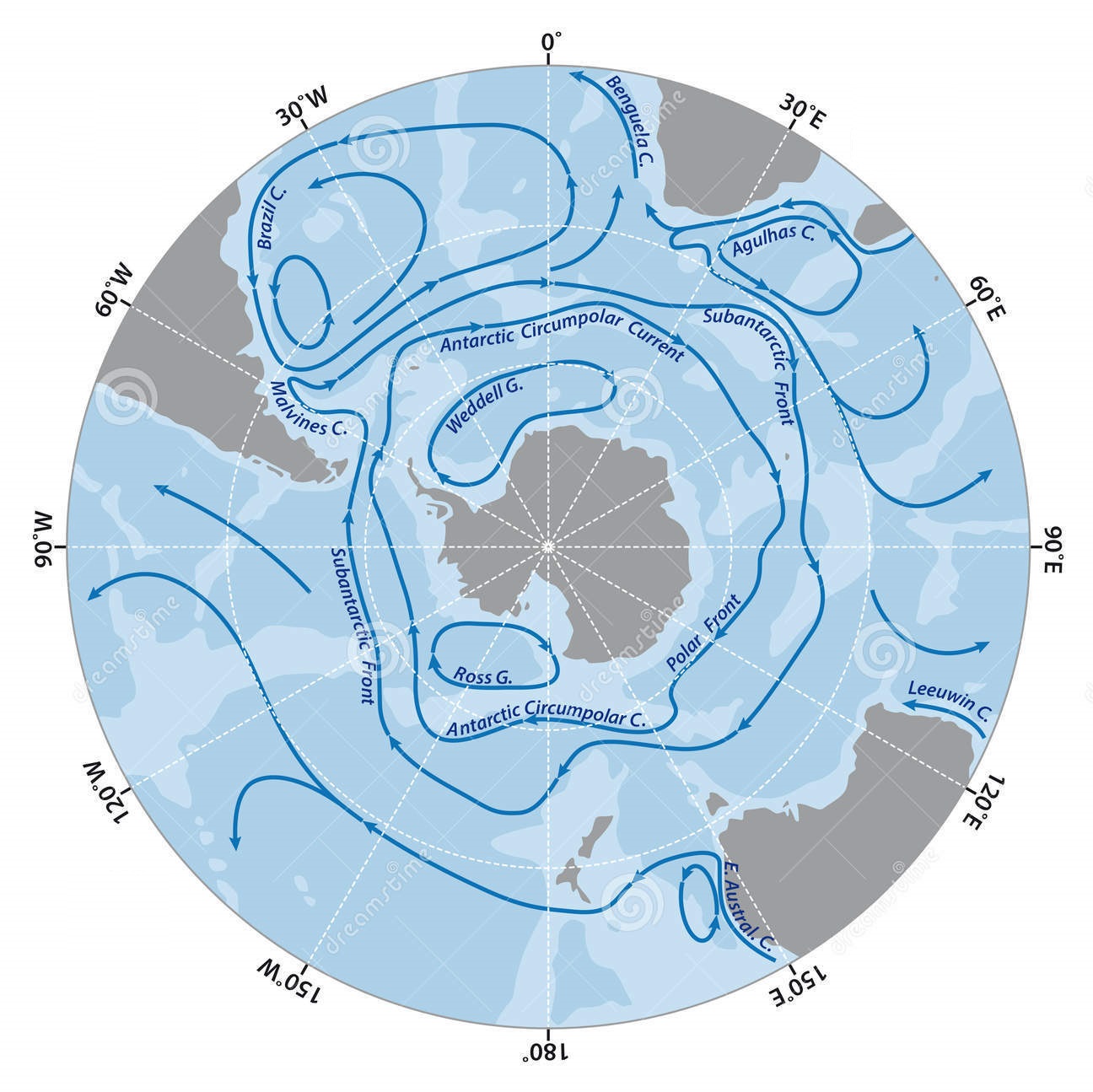 Sea currents around Antarctica. You can see the enveloping shape of the Antarctic Circumpolar Current.

The ice pack or sea ice that forms around the Antarctic continent, about 1 m deep, has a range whose minimum is 2.6 million km², in March to a maximum of 18.8 million km² in September , an increase of more than seven times. Antarctic icebergs can be imposing in size, spreading for miles, and are a danger to navigation.

The deepest point in the ocean is at the southern end of the South Sandwich Trench and reaches 7,235 m deep. 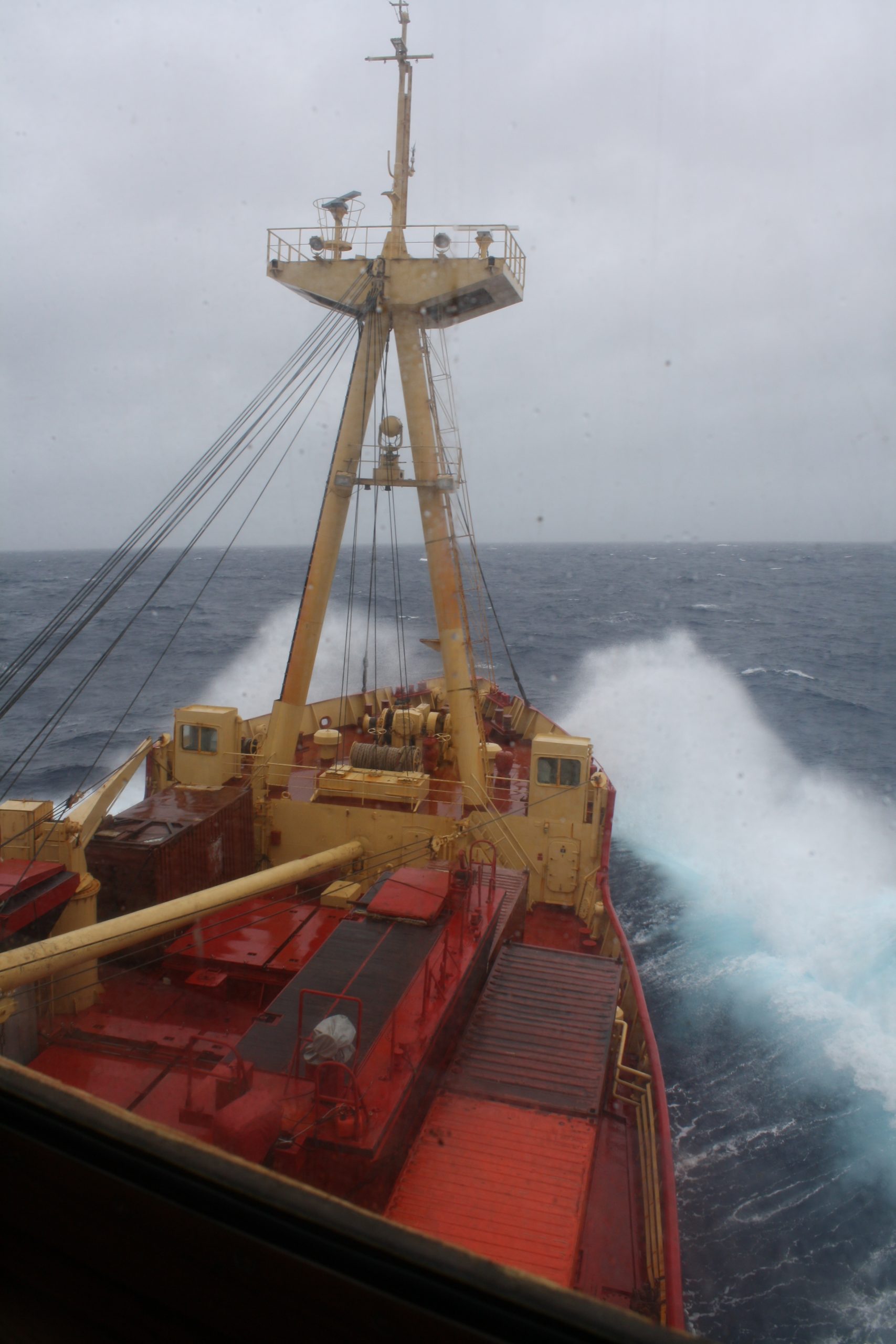 Sailing in the Drake Sea. By Alfredo Soto. 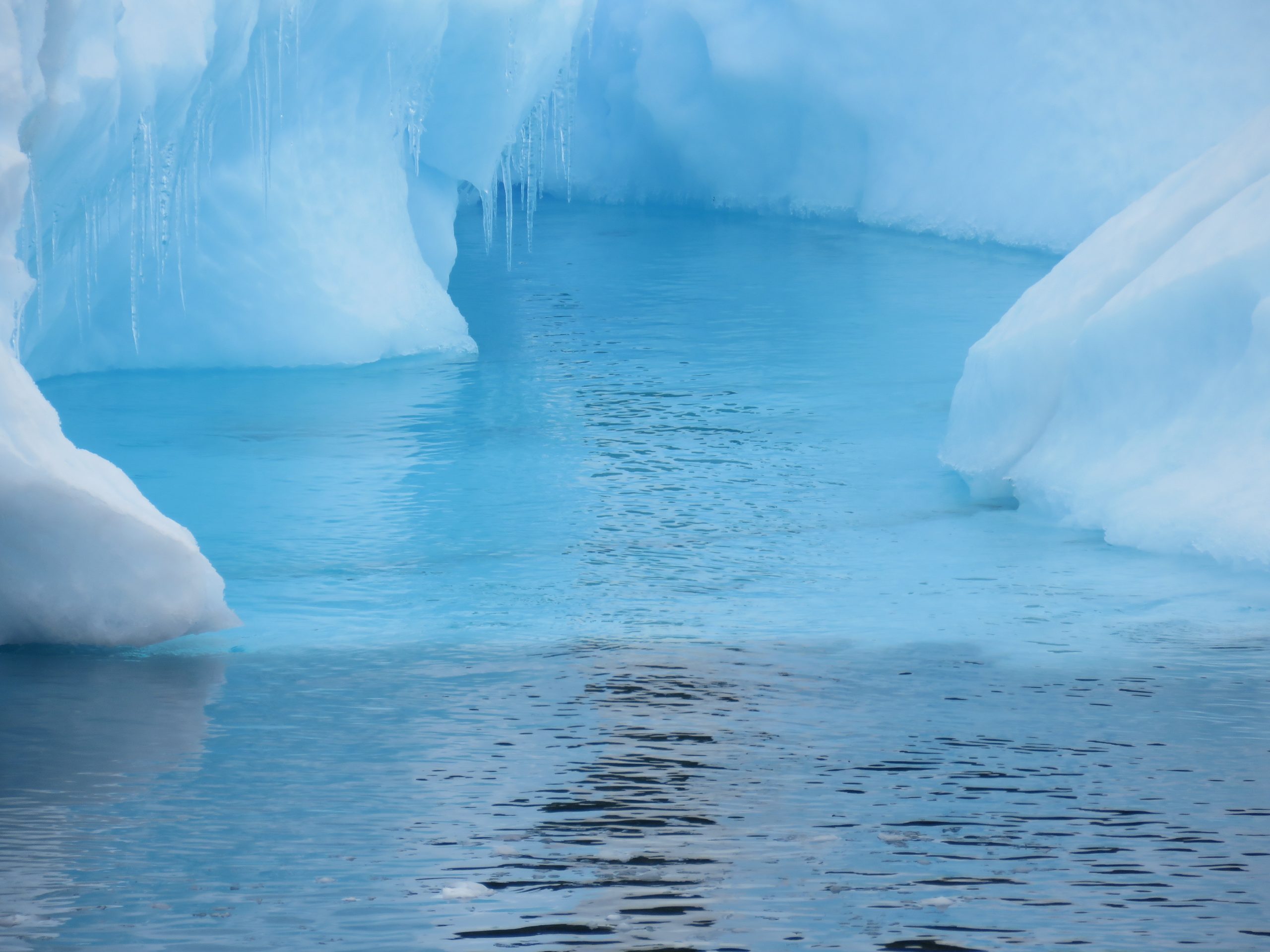 Icebergs can reach gigantic dimensions that make navigation difficult and can even make it very dangerous. By Alfredo Soto.

During May the Month of the Sea is celebrated. Let us remember the close relationship that exists between the imposing Antarctic ice and the oceans. The contribution of fresh water and nutrients to the seas adjacent to the Antarctic cap provides and generates unique conditions that have a global influence in all areas. For example, meltwater that comes into contact with ocean currents, altering its salinity, which influences the interaction between the sea surface and the atmosphere, or the transport of cold water that generates less precipitation in specific places on the planet. As always, ice and glaciers play an important role in what is this immense machine called Earth.

CIGA-FGC Agreement: This article was published under the collaboration agreement between the GAIA Antarctic Research Center of the University of Magallanes and the Fundación Glaciares Chilenos.