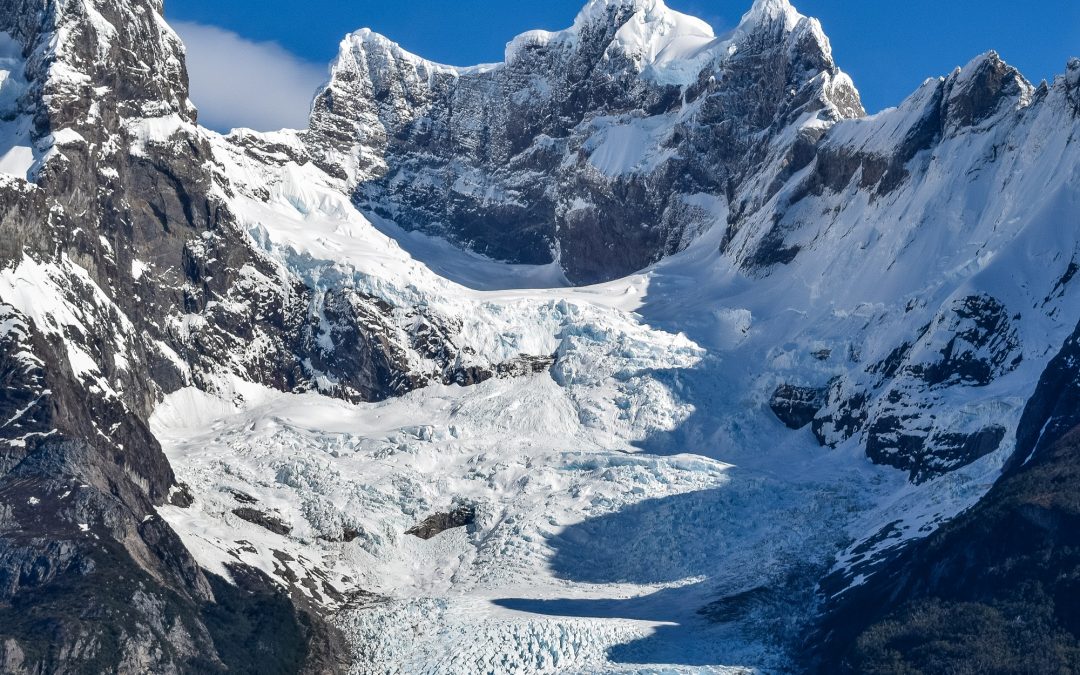 Glaciers are powerful agents of erosion, which have profoundly altered the earth’s surface for thousands of years, however the mechanisms that govern glacial erosion (wear caused by the movement of ice on the earth’s surface) have not been fully understood, this because they occur under the ice, hidden from view.

One of the big questions among glaciologists is; why some glaciers are more erosive at their bases than others, and what factors are behind such differences.

This diagram shows how glaciers can erode the rock base. Abrasion involves scratching the bedrock with debris on the basal ice. Plucking is the removal of entire chunks of the rocky base. Image from nps.gov  (link).

An international group of researchers, led by Simon Cook (Glaciologist from Dundee University, Scotland), may have found an important piece in this puzzle. Compiling glacier rock base erosion rates, landslide speeds, and weather data from 38 glaciers, they found that precipitation is the most important factor in controlling glacial erosion. In his study he concludes “ what we found is that there is no systematic increase in the rate of erosion of the rocky base of the glacier with increasing temperatures, but it was the case with rainfall” Cook explained that two forms of precipitation, rain and snowfall, influence the erosion of said base. For one thing, rainwater can seep into the rocky base of the glacier lubricating the interface between ice and rock allowing the glacier to slide faster, this process leading to further erosion. Snowfall on the other hand can accumulate on the surface and create a thicker and steeper glacier, which again promotes faster sliding of the rocky base and higher rates of erosion.

Cook and his teammates discovered that the greatest amounts of erosion were occurring under relatively warm glaciers, so the temperature acts as a threshold that when crossed allows rapid erosion of the glacier’s rocky base when accompanied by enough precipitation.

Michele Koppes, who was not involved in the current study, agreed. ” That confirms my 2015 study, which suggests that when the amount of water (rainfall) in the rocky bed of the glacier increases, the rate of erosion also increases by an order of magnitude or two .”

Cook acknowledges that the underlying data for the study “is not completely bulletproof, there is a great deal of variation in that data “; referring to the particular characteristics of each glacier and the different techniques used by the researchers who acquired the data.

In some cases, the researchers measured only the amount of dissolved sediment in the meltwater streams leaving the glaciers, while others also explained the cobblestones and rocks they carried. Other researchers looked directly at the ice, chiselling and measuring the volume of sediment carried by the glacier. In other cases, where glaciers discharge directly into lakes or the sea, scientists took sediment cores from the bottom of those bodies of water, trying to estimate how fast that sediment accumulated.

Despite this wide range of measurement techniques, there is still a significant relationship between how fast glaciers move and the amount of erosion that occurs on their bedrock. Another problem is the limited climate data available in many remote areas. In the future, Cook calls on other teams to use higher-resolution weather data, or even collect weather data on-site.

” It is easier to get to the surface of the Moon, than to get under a glacier and know what is happening there, so there are many assumptions involved in these measurements, ” Cook concluded. This opens the gap to further explore this relationship between precipitation, temperature and erosion rate of the rocky base of glaciers, without a doubt a pending challenge for glaciology and earth sciences.

In the cover photo, located on Monte Balmaceda, you can clearly see the effect of the glacier on its surroundings, sculpting the rock in the shape of a “bowl”.